38 photos of animals that were taken at the perfect time 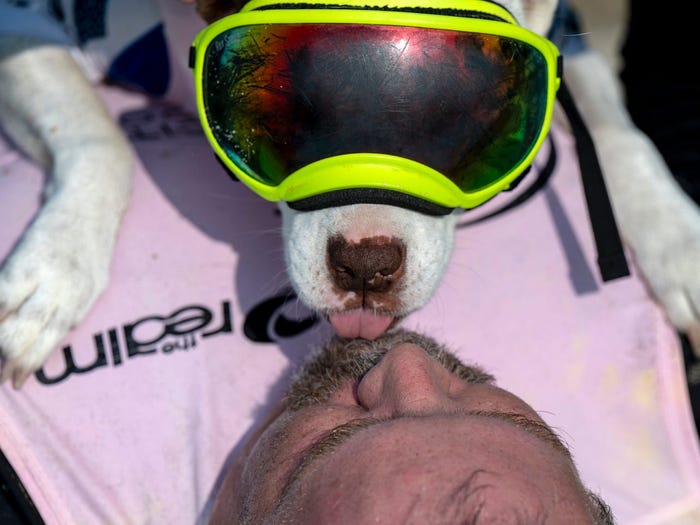 This photo proves the phrase should be "like a squirrel in headlights."

This squirrel was definitely unprepared for whatever it just saw. The photo, taken by Mary McGowan, was the overall winner of the 2018 Comedy Wildlife Photography Awards.

This panda plays in the snow better than most humans.

This is how all snow days should be celebrated.

This beluga whale is camera-ready.

A young girls reacts as she is greeted by Juno, a 15-year-old male beluga whale. Tim Clayton/Corbis via Getty Images

Juno knows how to work his angles.

This fox has perfect aim.

We can only wonder what their daily conversations are about.

In the time of the coronavirus, this seems like a pretty solid way to communicate.

This image, called "How are you, my neighbour?" was also part of 2019's Mars Petcare Comedy Pet Photo Awards.

Here's some epic side-eye courtesy of Elwood the dog.

This seal has the ultimate disgusted face.

This is a look of shock and awe. George Cathcart/CWPA/Barcroft Images

They're shocked by some intense gossip — seals are just like us.

This ostrich is ready for his close-up.

As Tyra Banks would say, this ostrich needs to learn to "smize" — smile with your eyes.

Who among us hasn't wanted to just grab their birthday cake and chow down?

The gorilla Fatou eats a birthday cake at the Berlin Zoo. Axel Schmidt/Reuters

This is proof that primates and humans really aren't that different.

You can see the darndest things on the streets of NYC.

A dog and its owner during the 28th Annual Tompkins Square Halloween Dog Parade. TIMOTHY A. CLARY/AFP/Getty Images

It's not every day you see a Tyrannosaurus rex walking their dog.

What a polite polar bear — not like these bears that took over an entire town in Russia.

These two flamingos combine to make a heart.

They complete each other.

This little guy is definitely unamused.

We've all seen that look when we wake up our parents from a nap.

OJ is too cool for school.

A dog named OJ wears sunglasses as he stands on the Embarcadero with his owner in San Francisco. Robert Galbraith/Reuters

Even dogs can rock the tiny sunglasses trend.

This dog knows where he's supposed to relieve himself.

A dog's toilet is a good invention. Western Mail and Echo/Mirrorpix/Getty Images

If only every dog was this well trained.

Flynn is more excited than his owner to win the Westminster Dog Show.

Flynn the Bichon Frise poses after winning Best in Show at the Westminster Kennel Club. TIMOTHY A. CLARY/AFP/Getty Images

That is a look of pure joy.

There are two elephants in this photo — the real one, and the one hiding in the water splash.

Do you see them both? Courtest of RailTieYardGame

This dog is sneaking a treat while his friend is distracted.

This pup knows how to travel in style.

The best way to get across the park ...

This dog breed is a Komondor. TIMOTHY A. CLARY/AFP/Getty Images

The mop-like coat of the Komondor requires daily grooming.

Tom Hardy and his co-star Rocco from "The Drop" pose. Charles Sykes/Invision/AP Images

This little guy is checking out his friend's butt.

What are friends for?

This gives a whole new meaning to the expression "working like a dog."

This dog looks like it procrastinates with the best of us.

A conveniently placed bird makes it seem like this bear is about to take flight.

This bear is about to fly off. Adam Parsons / Barcroft Images

This pelican needs to work on his aim.

This fish clearly wasn't ready to go just yet.

Linda the llama is getting a smooch from her new friend.

Would you kiss a llama?

Giraffes are tall, but not this tall.

Forced perspective is to blame here.

You can almost hear exactly what this photo must sound like.

Donkeys are known for their braying. Ingo Barth/ullstein bild via Getty Image

This donkey is not holding back.

Owls also get grossed out by their friends' PDA.

A burrowing owlet is embarrassed by the kissing behind him in Salton Sea, California. Melissa Usrey/CWPA/Barcroft Images

PDAs, or public displays of affection, are uncomfortable for all members of the animal kingdom, even owls.

This photo was taken right as this human was getting a little kiss.

James Wall gets a good-luck kiss from his pit bull, Faith, before competing in the Surf City Surf Dog competition on September 25, 2021. MediaNews Group/Getty Images

Who among us hasn't felt like our mom is dragging us out of bed and to school like this?

This is one of the finalists fromt the 2021 Comedy Wildlife Photography Awards.

This kangaroo looks like he's serenading the Australian outback.

Chevron icon It indicates an expandable section or menu, or sometimes previous / next navigation options.